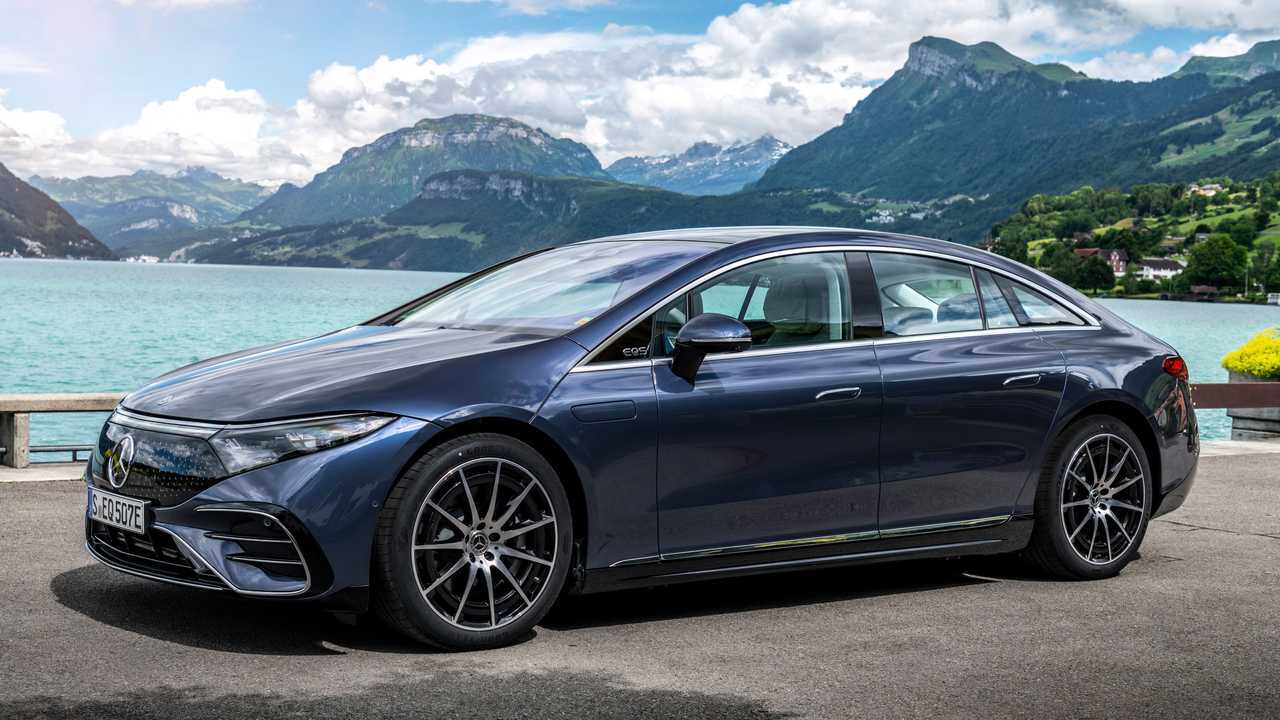 Whenever you see an S badge on the back of a Mercedes-Benz, you’re primed with certain expectations. On AMG models like the C63 S, it means higher performance and more aggressive styling, and on Benzes like the S580 and GLS, it means peerless, understated luxury. Does the 2022 Mercedes-Benz EQS live up to the standard the 19th letter of the alphabet conjures? That’s what we want to find out.

The flagship EV will be available in the US in rear-drive EQS 450+ and all-wheel-drive EQS 580 4Matic forms. The EQS is a totally new design, with a 107.8-kilowatt-hour battery hidden in the floor and endowing both 450 and 580 trims with a WLTP-rated 780 kilometers (485 miles) of range, a number that’s likely a bit optimistic – figure an EPA range of 400 miles or so when it’s rated by the Feds. By the way, confused by the plus sign in the 450’s name? It represents an extended-range battery, a meaningless addition since Americans won’t have access to the standard 90-kWh unit destined for other markets.

Fully electric vehicles are somewhat new to Mercedes-Benz, with a history that includes only the discontinued Smart Electric Drive and B-Class EV, as well as the overseas-only EQC crossover. The EQS will be the first Mercedes EV many Americans will encounter, and it had better be good enough to wear that three-pointed star, much less invoke the vaunted S-Class in EV form.

First impressions will decide that for some folks. Put simply, the Mercedes EQS (sorry, “EQS by Mercedes-EQ,” if you can stomach the automaker’s official name) is not a conventionally attractive vehicle. An arching roofline and short, clamshell-style hood underscore the idea that the EV future need not look like the internal-combustion past, but not everyone will be ready to make the jump from traditional sedans to this teardrop-shaped liftback. And we’re not sure the unusual design actually yields many palpable improvements – there’s no front trunk, and a surprisingly long dash-to-axle ratio seems to waste lots of space ahead of the driver.

However, beauty is in the eye of the beholder, and this particular oculus finds the EQS to be quite attractive thanks to its simple form and neat details. The faux grille panel features dozens of teensy little star shapes – a veritable night sky surrounding the center badge – while the coiled LED taillight elements recall an old lightbulb (a clever nod to the general public’s first encounter with electricity). The shape also contributes to an industry-best drag coefficient of 0.20, helping the EQS glide through the air with little resistance. And the sedan is deceptively large, imparting it with the regal stance befitting a flagship.

Inside, the EQS is far less divisive. The optional Hyperscreen hides three individual displays under a massive piece of curved glass. In front of the driver is a 12.3-inch digital instrument cluster, and a 17.7-inch OLED display serves as the primary infotainment system. New MBUX software adorns that center screen, with a zero layer that overlays audio controls and suggested applications on a full-screen map display. The third piece of the Hyperscreen puzzle is a 12.3-inch passenger touchscreen running the old MBUX, allowing the co-pilot to suggest destinations, adjust seat and climate settings, and listen to music via Bluetooth headphones.

Over time, the system learns your routine and suggests routes or phone calls based on your schedule, placing recommended tiles onto the aforementioned zero layer – techno-wizardry that pixel junkies will love. Luddites won’t have a difficult time getting accustomed to MBUX either, thanks to a physical climate control panel and relatively simple touchscreen interface for audio and comfort features. But even without considering the screen count, the EQS is a phenomenal luxury vehicle.

The EQS has an impressively constructed interior, hewn in soft leather, excellent plastics, and a few attractive splashes of wood and metal trim

There’s ample space for up to five passengers – Mercedes doesn’t have specific numbers yet, but we felt as comfortable in the airy sedan as we did in the S-Class, with plenty of room in all four outboard seating positions. There’s plenty of space to stash your stuff too, with a large center bin and under-console cubby that provide a good amount of storage. And with 22 cubic feet of cargo volume under the huge liftgate, Mercedes says a frunk really isn’t necessary – though the Tesla Model S boasts up to 31.6 cubic feet split between a 26.3-cube cargo hold and a 5.3-cube frunk. Fold the EQS’ rear seats and there’s 63 units of cargo space.

Helping underscore its nominal connection to the S-Class, the EQS has an impressively constructed interior, hewn in soft leather, excellent plastics, and a few attractive splashes of wood and metal trim. Flimsy interior door handles are a lone anomaly; everything else is very nice. In sum, the EQS feels much more well-built than the cheap-feeling Tesla Model S, while offering more space than the richly appointed – but cramped – Porsche Taycan. Traditional Mercedes buyers will feel right at home in the cushy, cosseting EQ flagship.

The big Mercedes EV’s comfortable and spacious cabin presages the rest of the driving experience. Our first go-round was in a base EQS 450 model, which makes 329 horsepower and 416 pound-feet via a single rear motor, pushing the sedan to 60 miles per hour in a claimed 5.9 seconds. Performance feels brisker than that, a testament to the instant-torque response of any electric motor, and the EQS 450 had zero difficulty keeping up with freeway traffic, easily maintaining a drama-free 80 mph.

Either at speed or in town, the EQS is a polished vehicle. While the silent propulsion of some electric cars can actually highlight other sensory intrusions, the EQS is quiet and composed, whether on pockmarked city streets or cutting through the air. Wind and tire noise are well-controlled, and the four-corner air suspension soaks up pavement blemishes like a hovercraft. Our 450 boasted a Nappa leather interior in an unusual Neva Grey and Biscaya Blue combination, and the optional multifunction massaging front seats made the miles slip by with nary a complaint.

Either at speed or in town, the EQS is a polished vehicle.

Unfortunately, the EQS 450 revealed a few bad habits as soon as our route got twisted. Mercedes allows the driver to select the amount of braking regeneration, and in either the maximum or normal setting, we found the brakes difficult to modulate between recuperation and friction. Furthermore, the brake pedal moves downward through its travel all by itself when coasting with regen activated, meaning it’s never in the same place you left it. Only with energy recuperation completely disengaged could we operate the brakes smoothly on a winding road.

The big, heavy sedan isn’t particularly agile either. Tight hairpins revealed every pound of the EQS 450’s 5,597-pound weight, with plenty of understeer to go along with the vague steering. The somewhat unpredictable handling behavior also exacerbates poor sightlines. A long, high dash yields a mail-slot windshield, and the sloping front end made it all but impossible to place the car’s dimensions accurately. We didn’t have the same problem on the traditionally shaped S-Class, and a lower dash would do wonders for the EQS. At least there’s standard 10-degree rear axle steering to help with parking and city driving.

The EQS 580 4Matic allayed some of those dynamic concerns (or at least distracted us with gobs of grunt). With each axle getting its own motor, it makes a prodigious 516 hp and 631 lb-ft, enabling a 0-60 time of 4.1 seconds – staggering for such a large, non-AMG Mercedes. Although heavier at 5,888 pounds, the EQS 580 feels better-equipped for quick cornering thanks to less understeer and added corner-exit grip. It still suffers from the same invisible hood and vague regenerative brakes as the less expensive 450, but then again, neither EQS variant is meant for maximum-attack canyon driving.

Where both excel is in normal commuting and long-distance grand touring, experiences that allowed us to test the Mercedes-EQ sedan’s impressive driver-assist technology. Borrowed from the S-Class, the EQS boasts an optional augmented-reality head-up display, which illuminates lane lines and leading vehicles to help the driver maintain a safe following distance and trace curves appropriately. Full-speed adaptive cruise control with stop-and-go and excellent lane centering tech help out here as well, working seamlessly to ease driver fatigue.

Settling into a long span of freeway driving, we turned our attention to the EQS’ battery range estimate. WLTP ratings tend to be rather optimistic and we didn’t fully deplete the 107.8-kWh battery pack in either car, but our back-of-the-napkin math based on a couple days of driving through Switzerland suggests the EQS might actually achieve its lofty range goals.

We started our drive of the 450 with a computer-estimated 442 miles of range on a nearly full battery. After 96 miles of mostly uphill freeway and switchback driving in the Swiss Alps, we ended our day’s drive with 311 miles of range left. Our experience in the EQS 580 was similarly impressive – a three-quarter-charged battery at the beginning of the drive suggested we had about 342 miles to go before needing a jolt, and after 109 miles of hard driving, the range estimate read 249 miles with a half-charged battery.

As such, we think the EQS will handily beat the Tesla Model S’ 402-mile EPA rating, and it might also eclipse the Lucid Air Grand Touring, whose unofficial, estimated range of 500 miles is the current champ among EVs. Helping the Mercedes stretch its legs between charges is a smart-regen function that uses surrounding traffic and the navigation route to determine if recuperation-free sailing, maximum generator drag, or anything in between is most appropriate. This function makes the already unpredictable brakes even more glib about their behavior, but using it had a decidedly positive effect on electrical consumption.

A 200-kilowatt DC fast charger can charge the battery from 10 to 80 percent in 31 minutes, adding 180 miles of range in 15 minutes if you just need the electrical equivalent of a splash-and-dash. Mercedes won’t supply an at-home wallbox for the car, but a commercially available 9.6-kW AC charger can fully replenish the battery in 11 hours and 15 minutes.

Another test of the Mercedes EQS’ popularity with consumers will be its price, but unfortunately, we don’t have anything to report on that front (it’s also why we haven’t assigned a rating to either EQS model we drove). Mercedes-EQ representatives winked that it would likely mirror the pricing structure of its S-Class equivalents, so we figure the EQS 450 will start at $110,000, rising to $120,000 or so for an EQS 580 4Matic. Those estimates split the difference between the $84,990 Tesla Model S Long Range and the $129,990 Model S Plaid, both of which offer better performance but lower interior quality.

Porsche’s nearest equivalent to the Mercedes, price-wise, is the Taycan 4S equipped with the Performance Battery Plus. EPA-rated (perhaps conservatively) at 227 miles, the Taycan 4S earns respect not via long-distance cruising but excellent back-roads behavior, though its sporty proportions tax rear passenger space by quite a bit over both the Tesla and EQS. Then there’s the Lucid Air, which starts at $131,500 for the flagship Grand Touring trim. With a similar form factor and unofficial range estimate of 500 miles, it will likely be Mercedes’ biggest rival for the wallets of forward-thinking luxury buyers.

The Mercedes EQS has all the DNA the last letter in its name would suggest.

Still, the EQS benefits from its manufacturer’s decades of experience building luxury sedans, a pedigree that shines through every time you go for a drive. It feels up to the task of a long trip, thanks to its effortless powertrain and exceptionally comfortable cabin. The EQS is brimming with easy-to-use technology. And it’s downright practical, offering SUV levels of cargo and passenger space. The list of plaudits goes on and on, with demerits appearing few and far between. It might look futuristic, but underneath that skin, the Mercedes EQS has all the DNA the last letter in its name would suggest.